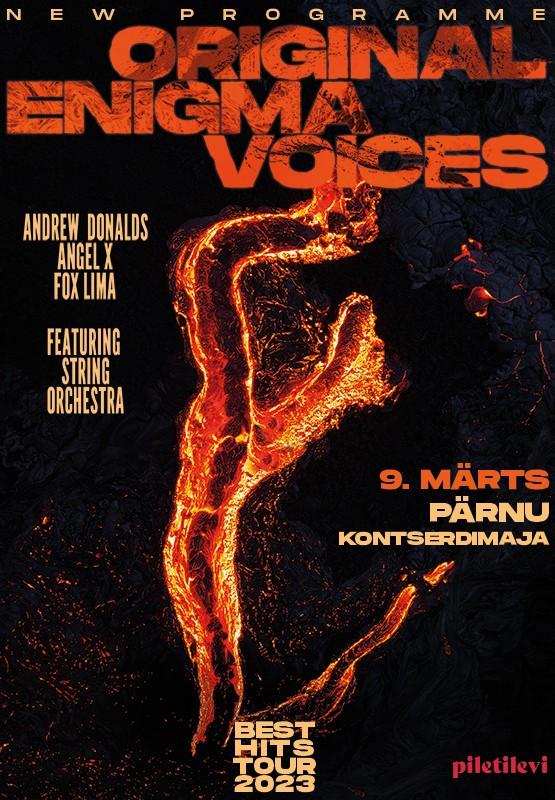 ENIGMA is the most mysterious band with an unforgettable and unique musical atmosphere, whose original members will perform in Estonia with a new show program, where all the band's most famous musical works will be presented. Three Grammy nominations, 70 million records sold, 300 million views on YouTube and over 100 gold and platinum records. Despite their insane popularity, studio group Enigma never went on tour until 2019. As part of the 2023 tour, the original members of Enigma will perform in major cities in Estonia. Andru Donalds, Angel X and Fox Lima, whose voices are known from Enigma's hit songs, will perform together in an incredible show "Original Enigma Voices". Over 20 songs from different albums can be heard accompanied by a string orchestra and a live ensemble. Hits such as: Sadness, Return to Innocence and Gravity of Love will be performed, as well as remakes of cult Enigma songs. The band was founded in the 1980s by German producer Michael Cretu. Enigma's music cannot be compared to anyone else's. The band enchanted listeners with its unique atmosphere and mystery. He inspires many people and artists with his combination of classical and contemporary music. Playing with different genres, songs, ethnic melodies, organ and mysterious voices will transport you to another reality for 2 hours. In 2019, the band gathered for the first time under the name "Original Enigma Voices" for a concert tour, within the framework of which they also visited Estonia, where 2 sold-out concerts took place in a row.  This time, "Original Enigma Voices" will perform new shows in major Estonian cities as part of the "BEST HITS TOUR 2023" tour. We are waiting for you at the legendary band's unforgettable show in Tallinn on March 9 Parnu 2023! This is a show You must see!!! Events website: http://www.originalenigmavoices.com